We met Sooty at the Congress Theatre in Eastbourne on 26th Septmeber.Â Â  Her Majesty presented Richard and Sooty with a bone for Sweep who had decided (wisely) that it was safer to hide in his kennel.

From 8th March 2015
The indians and the 7th Cavalry (under the command of General Custer) Â met in a field. Â Sitting Bull ordered his men to surroundÂ General Custer’s men. Â The general and all of his men (about 200 soldiers in all) were killed. General Custer was shot in the temple and in the left breast.Â The Indians lost between 36 and 136 dead (varies according to different indians who at the battle) and 168 wounded.

The Confederates have been caught by the Cavalry Soldiers, but they do not know that a war party is on the way and they will soon all be dead.

Major Reno’s patrol has just set off from the fort and they are going to be chased onto a hill and will be stuck there until the war party has gone.

General Custer has set off on his patrol but it’s all going to end badly when the Indian’s catch them.Â  The three outlaws are about to rob the stage coach, but they have not spotted the cavalry patrol following behind.Â  One of passengers punches one of the robbers out of the coach.

The war party has just left the camp.Â  They going to attack the town and steal all the guns from the fort.

The train has just gone past and time is three o’clock.

The robbers haveÂ  broken into the bank to steal all of the gold from the mine.Â  They are also don’t knowÂ  that the indian war party is coming.

The miners are quite busy today they have to make to 12 deliveries in one day to the bank as there is so much gold in the mine!

It’s so hot in the west and everybody needs a drink of whisky to cool them down and wash the dust out of their mouths.

The cavalry are fighting against the indians most of cavalry seem dead but the US Cavalry is bigger than one battle.

From 1st June 2013
General Custer and his men are setting out on patrol. 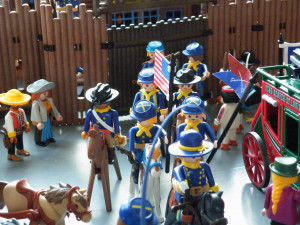 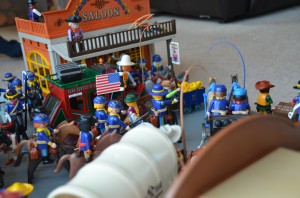 The towns people go about their business. Unware that the war party is approaching. 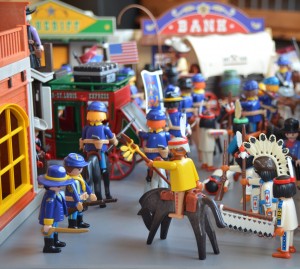 The bank isn’t so busy today In the saloon, cowboys have a drink and a meal, although a couple of outlaws are ready for a shoot out if the Deputy Sheriff finds them upstairs. A hint of some of fierce fight that followed. The cowboys and soldiers won the battle but suffered alot of dead and wounded. 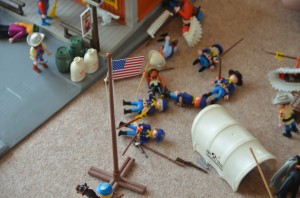 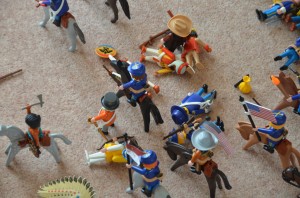 From 28th July 2013
I counted my pirates today and found that I had:

To keep these pirates in order I have:

From May 26th 2013
My Daddy and I added up my wild west characters (after a battle).

Despite having too many chiefs, the Indians often win against the soldiers, especially when they have help from the outlaws!

The Romans arrive in Egypt…

Pharaoh goes about his business

Nomad’s in the desert